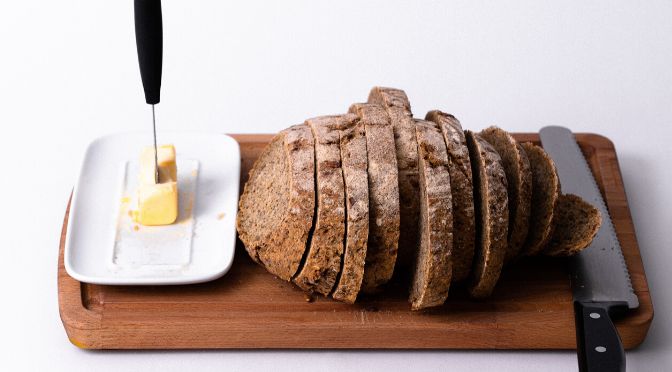 I’ve been trying to update my old post on this and it was a MESS.

It included things about mayo and hummus and other non-butter related spreads.

This is a post solely about vegan margarine and butter alternatives that don’t taste like plastic and chemicals.

The problem with margarine is that there are so many on the market that you don’t know where to start, AND it’s something that you eat every day but only in a small amount. Which causes a couple of conflicts:

So I have created this post, detailing the best vegan alternatives to butter. I have three. I didn’t feel the need to include any more, but if you wish to add your two-penneth regarding your favourite then hit up the comments.

In my opinion, this is the closest we’re going to get to actual butter.

It tastes like Lurpak spreadable, is great on toast, and makes ok mushrooms on toast.

However, as always, there are caveats:

The recall didn’t put me off because of the threat of cross-contamination, but it did lead me to my current favourite butter alternative. Bad luck Naturli’. You’re delicious but rare and expensive.

It’s mild tasting and is pretty nice on fresh, crusty bread. It’s also a great multi-tasker, and I think does the best job of pretending to be melted butter. out of all the alternatives I’ve tried. I find it pretty indistinguishable from butter in things like fried mushrooms and risotto.

Pure is also readily available. Interestingly I’ve not seen it in Sainsbury’s but it’s available in Tesco, and in the little Coop in my town.

Another bonus of Pure, which isn’t particularly brand specific, is that the cleaned out tubs are the perfect size for freezing single portions of things like curry or chilli.

I’m yet to be organised to actually make enough chilli to freeze it yet, but the tubs are ready and waiting for when I do.

I have considered switching back to Naturli’ because it tastes so damn good BUT we’ve had a rather large shift in our household recently.

In that my boyfriend has switched to Pure.

You don’t know him, so you don’t know what a MASSIVE change this is to him. He’s a die-hard Flora fan, continuing to buy it after they changed the recipe even though he hated the taste (creature of habit barely even scratches the surface of what he is).

We’re officially a one margarine household, something we’ve never been. Which makes shopping a teeny bit easier.

Although now there are always crumbs in the butter.

ALL FLORA PRODUCTS ARE VEGAN.

I don’t like Flora much – it has a weird aftertaste which you get used to after a while but you shouldn’t have to.

Flora buttery is quite nice, but not as nice as Pure. However if for some reason you can’t get hold of Pure, go for Flora Buttery.

Please don’t come for me in the comments saying that I have crap taste in butter. It’s a very personal choice. If you like Vitalife you’re weird then be assured that it’s ‘naturally’ vegan, so you don’t have to change. To me, it tastes like chemicals, but you do you. Bleugh.