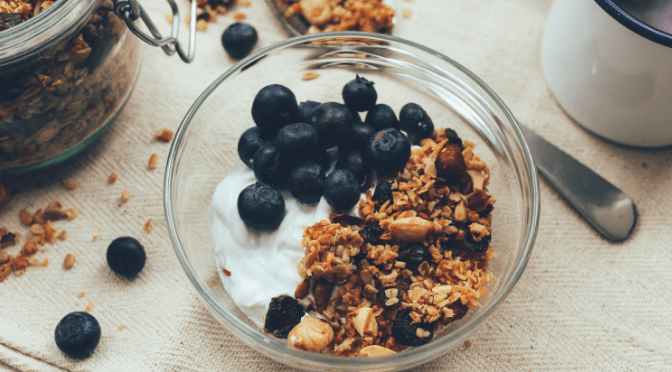 I half-arsedly practice intermittent fasting (and by half-arsedly I mean I usually cave and scoff some bread at midnight) so having a delicious, filling vegan breakfast is a Big Thing.

How much time one has to prepare one’s breakfast is rather an issue, so there are a couple of options below that either don’t take very long to prepare or can be mostly prepared the night before.

Organisation is your friend if you struggle to make time for breakfast. Or skipping breakfast altogether, which is not the heinous sin many humans claim it is.

On days when I know I’m going to be having a big lunch and a big tea I don’t bother with breakfast.

I can easily (EASILY) knock back 1000 calories per meal plus I have a v positive attitude towards snacking, so if you genuinely don’t have time/cba for breakfast knock it on the head.

Every single one of these meals would make a banging lunch. Or tea.

On days when I’m working from home, I have porridge for lunch, because it’s filling and I always have the ingredients in the house (nothing says procrastination like an unnecessary trip to the shops). It keeps me full till tea time, which is important because otherwise, I waste the day trawling the house for snacks.

This one’s for you Ailis.

Although tbh I didn’t know that Shreddies were vegan until I saw a Nestle ad shamelessly piggybacking on Veganuary.

Cereal is a great option for many people for breakfast because it’s quick, easy and nutritionally speaking, you could do worse.

Be aware that not all cereals are vegan though – some contain a form of vitamin D derived from sheep. Why, I really couldn’t say.

Here is a great list of vegan cereals in the UK.

I don’t personally have cereal for breakfast because it doesn’t fill me up AT ALL. If for some reason, it’s the only option, I’ll top it with a banana and some sultanas to make it go a bit further.

If getting enough iron is something that you really struggle with or worry about, then let me tell you this invaluable nugget of info:

The humble Weetabix (2 biscuits) contains about 4.5g of iron per portion – that’s a decent chunk of your RDA – half if you’re lucky enough not to have periods (you only need about 9g), though those of us menstruaters out there need a bit more (14.7g).

Ugh, I know it sounds wanky, but it’s really quite good. Slice your sweet potato and toast it in the toaster. I find that it needs two goes in the toaster for the longest setting.

My only issue with SPT is that I only have a 2 slice toaster, and I could really do with a four slicer so that all my ‘toast’ is cooked at the same time. First world problems, eh?

This is exclusively a summer breakfast for me (couldn’t say why), and I have it topped with fried mushrooms and onions, with a salad on the side.

It’s also nice with mashed avocado, and I feel fancy af, but also a bit wanky.

Tbh these are a once in a blue moon thing for me, because I cba making them. Although I have a mahoosive bottle of maple syrup in la fridge, so maybe I should make more of an effort.

I just toyed with the idea of making them today, but then I remembered that I have no flour. Except for cornflour. Which does NOT play nicely as a regular flour substitute. That stuff is WEIRD.

Still, pancakes are a delicious vegan breakfast. Here’s a link to my Pinterest board which has some great vegan pancake recipes. ***disclaimer***None of which I have ever made.

I’m gonna lump cinnamon rolls and croissants in with pancakes because they don’t deserve their own heading but they’re delish. Get the Jus Rol ones – you just open ’em up, slice ’em, and cook ’em. Check that they’re vegan in case the recipe changes, but as of today (7/08/2019) they’re vegan.

This is a tricky one, because it can be either the healthiest breakfast EVER, or packed with so much sugar it makes you ill. Honest. It happened to my boyfriend.

If you buy your granola (check the ingredients for honey) it probs has a lot of hidden sugar and if it doesnt, it may have a massive price tag.

However, homemade granola is super easy, healthier (sometimes) and cheaper. Melt a few tablespoons of nut butter and a drizzle of maple syrup in a pan. Add in some oats and nuts (enough that all the oats are covered sparingly) and bake for 20 minutes. Done.

There a billion smoothie recipes out there. Basically, experiment with different things until you find what you like.

I’d recommend adding silken tofu 1) for the protein and calcium and 2) for the milkshake-like creaminess it gives. Especially in strawberry smoothies.

Also if you don’t have a high-speed blender, get used to having spinach in your teeth. Or eat the greens with another meal.

You can add chia seeds (soak first to avoid chia seed teeth), hemp seeds (shelled, unless you have a Vitamix), frozen wheatgrass, protein powder, turmeric… all the healthy things.

Whiz it up first thing and you can forget about micronutrients for the rest of the day.

BTW, this may be a quick option in terms of making it, but it can take an age to drink a smoothie, so allow for that. Especially if you’ve used ice or frozen berries and it’s too cold to down.

For people that love leftovers, go for the breakfast bowl. A bit of left over chilli, last night’s salad, some beans, half an avocado…fry up some mushrooms and onions, put it in a bowl, and voila, a delicious and healthy, if slightly unorthodox breakfast.

I delayed making this for so long, because it seemed like too mch hassle.

IT IS EASY AS PIE.

I just fry up some mushrooms, onions and peppers, crumble in half a block of firm tofu and season the hell out of it with salt, black pepper, garlic powder, onion powder, turmeric, cumin and smoked paprika.

This is one to make if someone else is washing up.

I usually do veggie sausages, fried mushrooms and onions, hash browns, beans,  and toast. You could also do tofu scramble and I NEED to try frying the Quorn smokey ham-free ham because apparently, it’s a great bacon dupe.

This is defo a Sunday morning type thing, and again, CHECK YOU’RE NOT THE ONE WASHING UP.

I’m including overnight oats in here too.

Truly the king of vegan breakfast. They’re so diverse and can be as basoc or fancy as you like.

I’m currently loving the banana and almond butter combo, with some homemade blueberry chia jam (recipe here, but basically microwave some frozen blueberries, add chia seeds and a bit of apple juice and wait – and no, I’ve not tried the Nutella, but it looks lush).

I saw an article today that suggested adding mashed chickpeas to porridge (oatmeal to non-Brits I think) for a bit of added protein so I’m gonna try that today.

If you’re in a rush in the morning, your oats will be ready in minutes in the microwave. Add more milk if they’re too hot to wolf down. If you’re organised, you can prep them the night before, but if you’re not, it only takes two minutes MAX to mix your oats and milk. If you’re having a leisurely morning, slowly cooking your oasts on the hob really takes them to the next level.

Obviously the queen of breakfast.

I will nothing against toast.

Sure, it comes in many different levels of quality, but in general, a nice slice of wholemeal toast is a great, low cal, high protein (5g bitches) option.

The toppings are ENDLESS.

So, there we go – my fave vegan breakfast options

Oats are my go-to, but toast is my fave.

The thing is, oats fill me up.

Actually, not true. The combo of almond butter, oats and banana fill me up. Plain porridge doesn’t keep me going at all.

If you worry about protein, or are a bodybuilder, then sure you can go for protein powder or a shake. If I know it’ll be a long time till lunch I’ll just either have a bigger portion or add more nut butter. I’m not averse to just having a spoonful.

I’ve seen a lot of stuff about a celery juice being the elixir if the gods recently, so I’m going to definitely add more celery to my diet. I don’t have a juicer or a decent enough blender, so plain celery is the way I’m going. There’s also more fibre my way, and less washing up. Win Win! 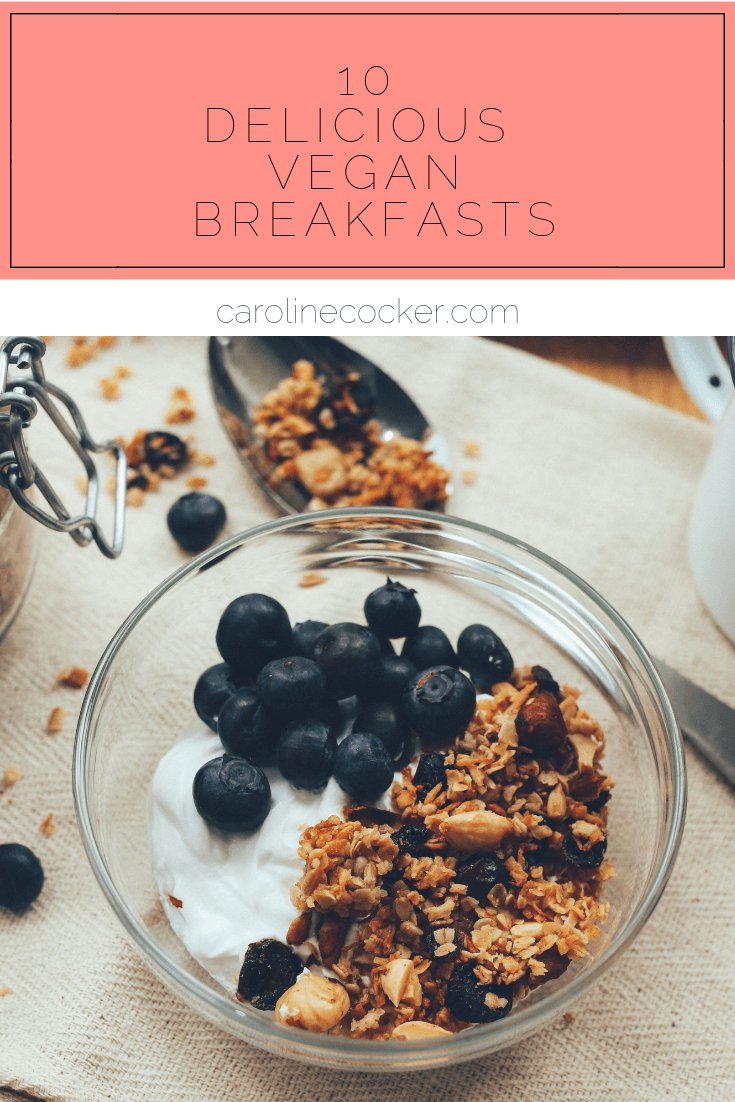 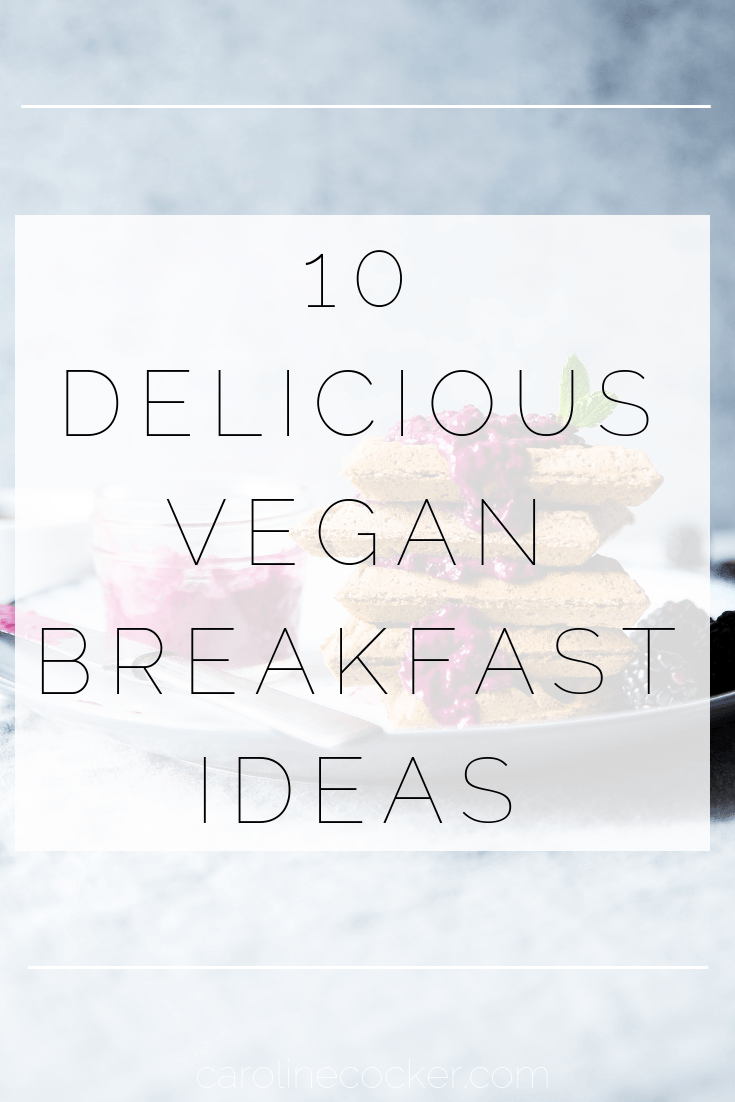 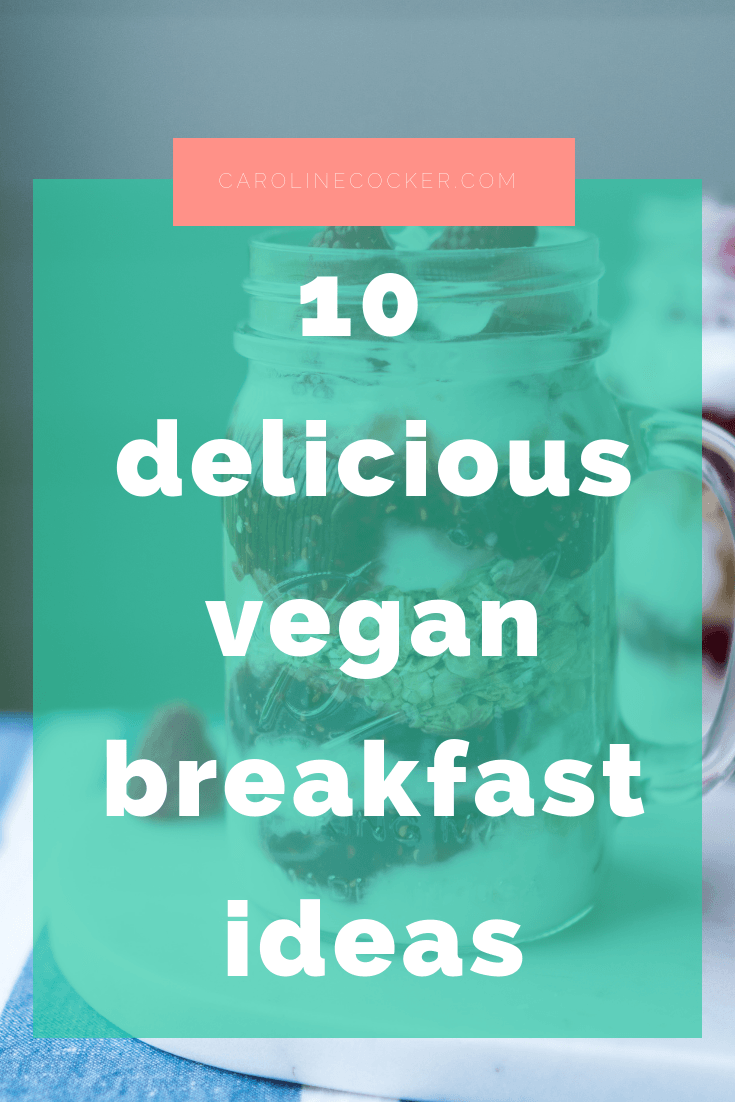 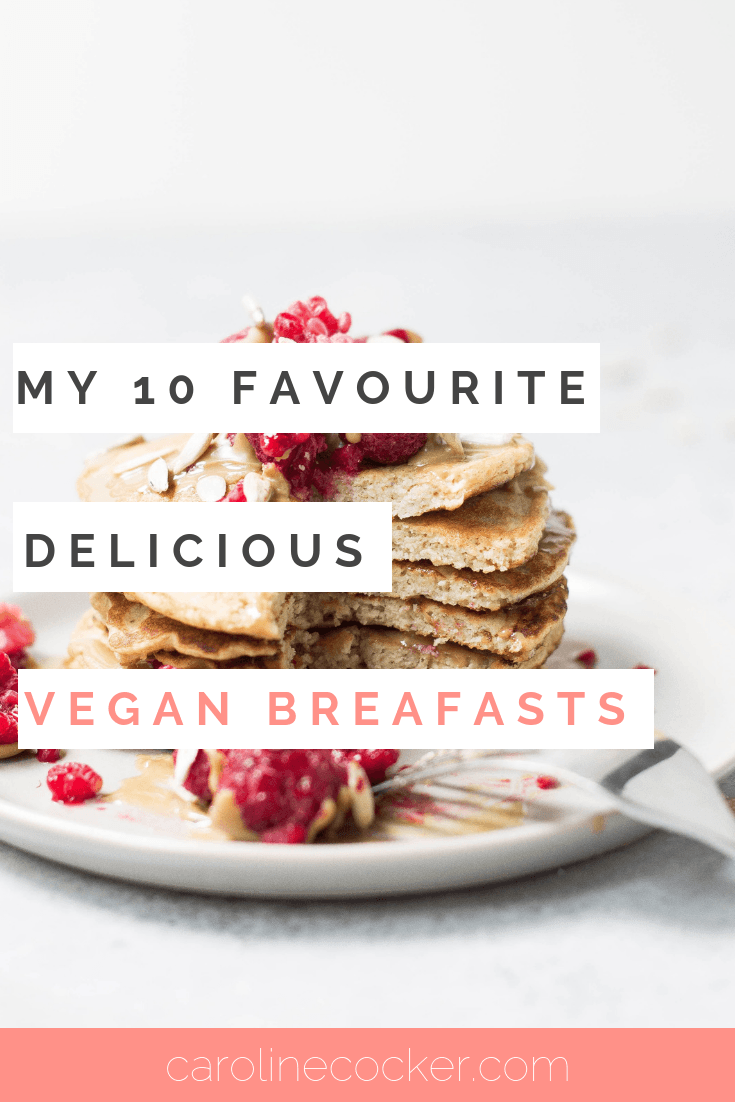 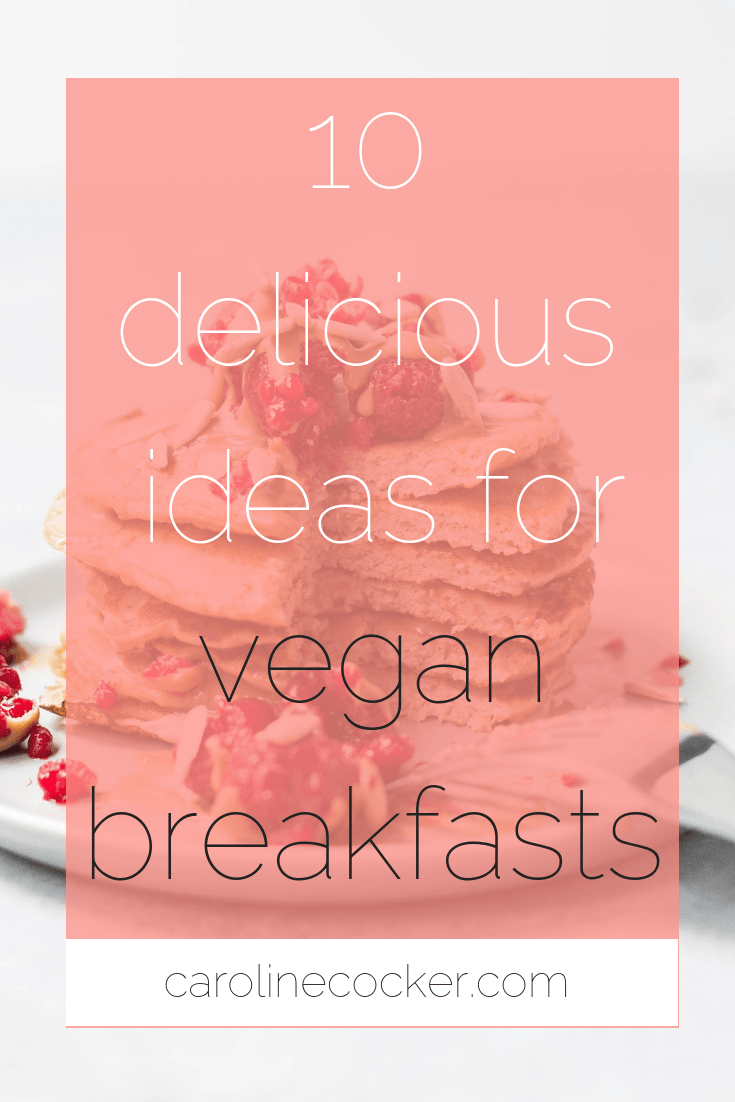 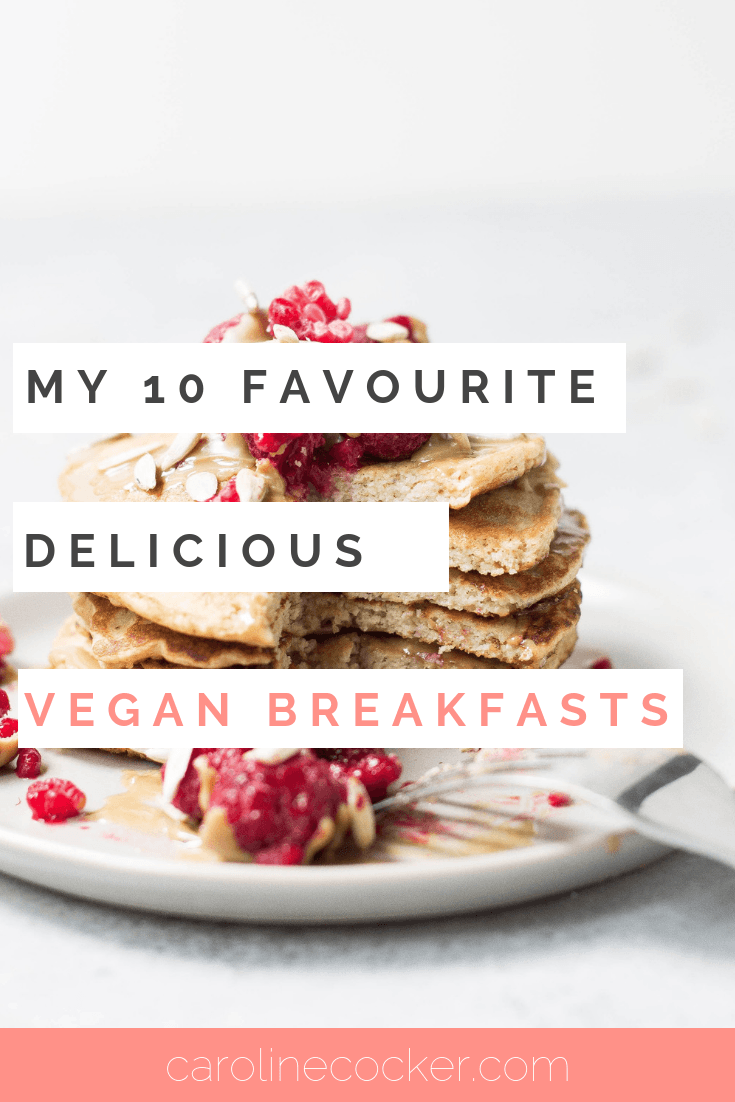