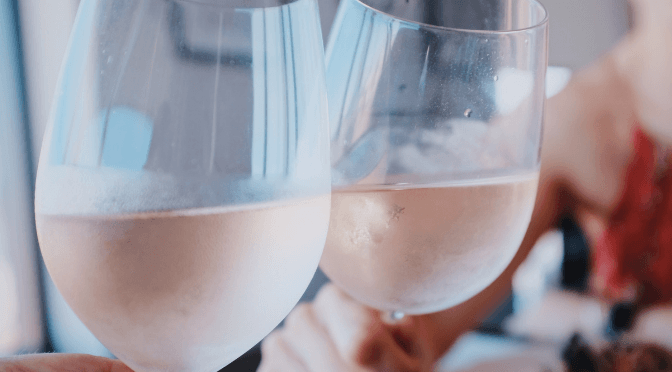 Because I’m a v organised creature (surprising I know) I’d already done my graphics and stuff for a post on having a hangover as a vegan before discovering that the post will probs appeal to more people if it was about how to have a duvet day as a vegan.

And it’s not even due to the massive influx in new vegan ready meals. Chips have always been vegan. Also bread.

I thought I’d divided this post broadly in half – the first half is more pressing information – how to deal with a hangover as a vegan when you have an early start. The second half will be more dedicated to having a great vegan duvet day.

How to be a hungover vegan that can function at work

Hopefully, you can walk to work. If not, get a lift. We don’t drink and drive in the corner of the internet, folks.

I know you don’t want to hear it, but a run will do you the world of good. A walk even. Obvs sleep is important, but when I’m hungover I always wake up super early, and then just lounge around in bed quietly wishing for the weekend. A run WILL HELP. Move your body. If you only have a mild hangover exercise may eliminate it entirely.

If you really can’t face exercise, give this Yoga with Adriene video a go. Don’t worry, she’s extraordinarily gentle.

I know that the sound of a blender makes you want to kill yourself but a smoothie really is your best bet. Also water, but if you needed me to tell you that water helps a hangover then you probably shouldn’t be drinking.

Toast if you can face it. Peanut butter is GREAT but I personally can’t think of anything worse when hungover (although it’s fine in a smoothie), so I go for hummus. If I’ve planned ahead adequately then I’ll have avocado on toast.

How to be a lazy hungover vegan

Not if I’ve got all day to lie in bed, mate.

Exercise is an incredible hangover cure (I know that makes me sound like a wanker BUT IT’S TRUE) but if I’m spending the day at home then I can afford to let my hangover dwindle away of its own accord. And therefore I will spend the morning in bed alternating between dozing for a few minutes and incessantly scrolling through my phone.

If I’m feeling ok and the weather’s nice, then I might enjoy a little walk around the garden. Or even a mosey into town if I haven’t planned well enough ahead, and need supplies.

Crisps definitely. I like the Walker’s Oven Baked, or perhaps a cheeky chipstick. If you can get someone else to cook you some chips even better. Ooo or some lovely crusty bread betwixt which you could pop some Quorn fish fingers.

You should probably eat some fruit. I eat defrost some frozen mango or stick to grapes. I like to take them all of the vine and put them in a bowl so I can eat them without taking my eyes off the telly.

It was my birthday the other week and my lovely friend Becky brought round a vegan cheese selection. Big news: it was INSANELY GOOD. It was by Tyne Chease and Christ, it was delicious. Next time I’m planning a duvet day, I’m getting some that in.

It does mean I’ll have to update this post on giving up cheese because now we don’t have to!

If you have a sweet tooth but don’t like dark chocolate, get yourself down to Tesco and grab some of their Free From rocky road. It’s just the job for people that liked cheap nasty advent calendar chocolate and don’t like the fancy stuff. I’m yet to try Vego chocolate, but apparently, it’s the one. I’ll report back.

If there was a Greggs in my town, it’d be a Gregg’s sausage roll. Or ideally four. I’m not joking. Warmed and dipped in brown sauce and mayo (wow, my Northern has really come out today). Yasss. Unfortunately, the nearest Gregg’s is a good 8 miles away, so having one whilst hungover is but a pipe dream for me.

I would also spend the day watching countless episodes of some trashy TV programme. I’ve recently rewatched Prisoners Wives and it’s SO GOOD. I’m not sure if I’ve mentioned it on this website before but I love a female-centric drama set in the North. No idea why. In the Club, Last Tango in Halifax, anything produced by Kay Mellor. Add the police and I’ll be happy forever. No Offence is STELLAR TV.

If I’m feeling too delicate for something gritty then Call the Midwife is always on standby. Netflix, I’m going to need you to add more seasons, please.

If it was to make me hungry despite having just polished off enough pasta for a family of four then I’ve very much succeeded.

Jokes aside, what my aim for a post on dealing with a vegan hangover was to help people understand that being vegan doesn’t mean you have to be healthy every minute of every day. You can have days where you gorge yourself of crap, just like anyone.

It goes without saying that you don’t need to be hungover to enjoy a duvet day. In fact, the hangover spoils it quite a lot. This is also a great recipe for having a sick day. I was ill between Christmas and New Year (which is the peak time for this kind of day) and followed the hangover day formula for a good four days in a row. I look back fondly on that particular cold.

A few points on drinking alcohol as a vegan:

I rarely have hangovers that require the level of self-care outlined in this post because er, I know it’s not great for me. However, I’m by no means teetotal. I am old though. My favourite thing in the whole world is to get home from work on a Saturday night and watch the episode of Gardener’s World from the night before with a glass of wine. We get our shopping delivered on a Saturday too, so the fridge is ripe for picking.

If any of you have a magical hangover cure, plz comment below. Ta. 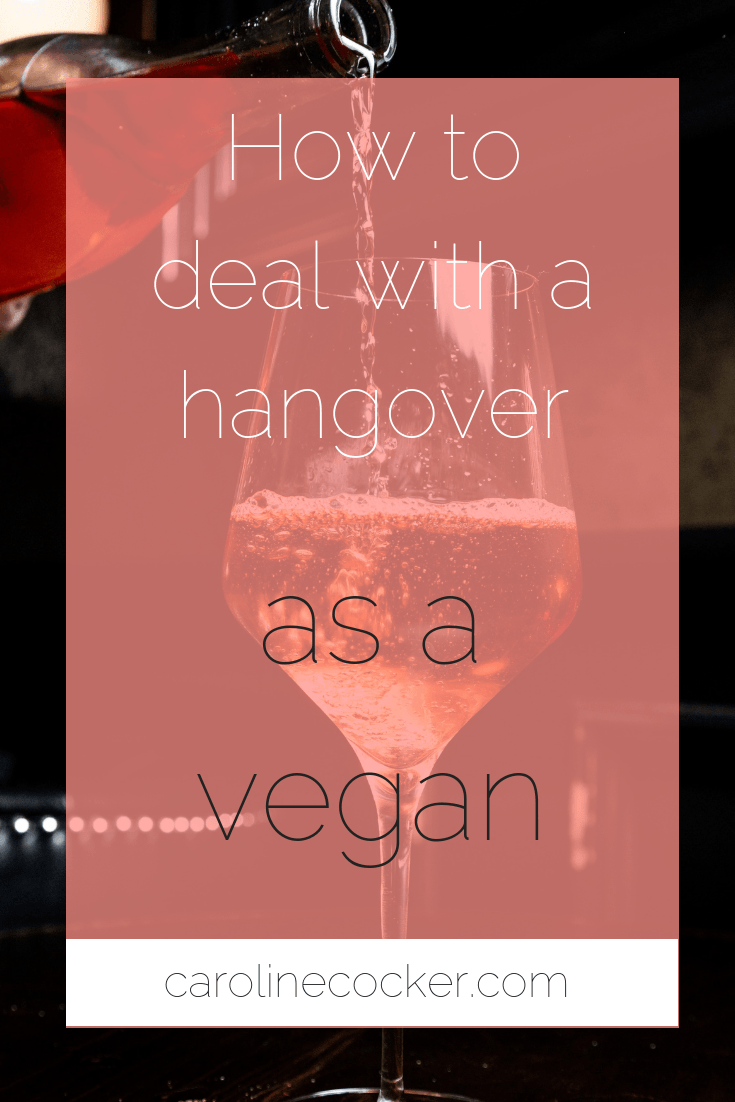 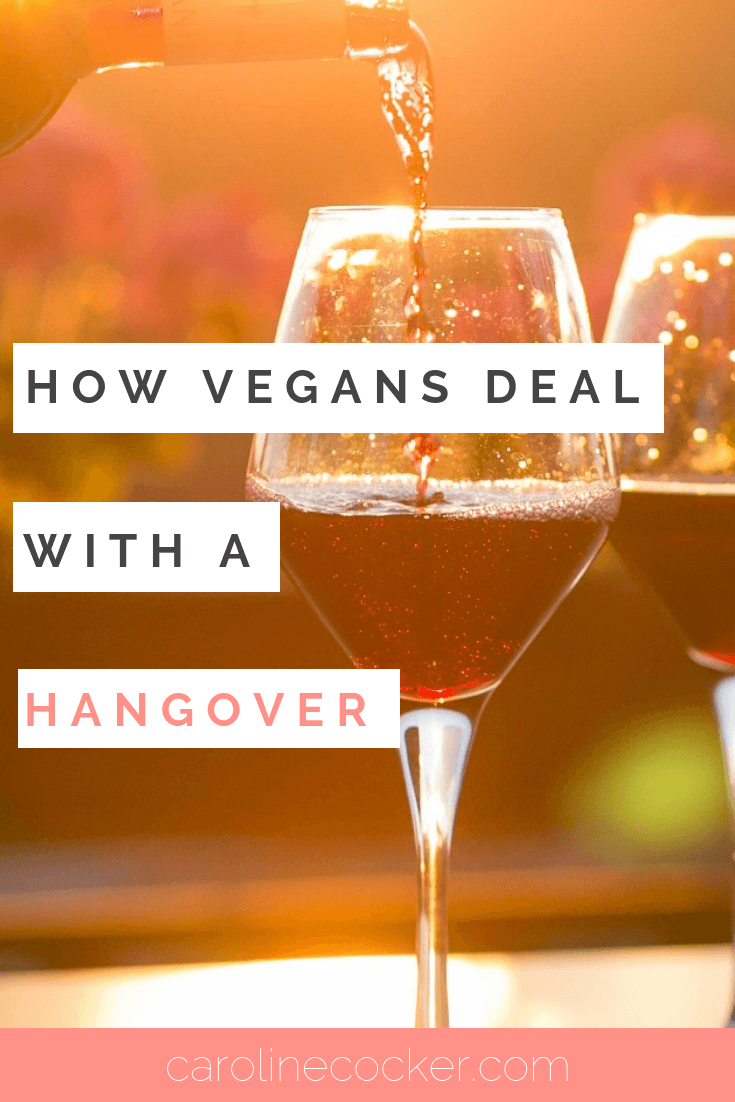