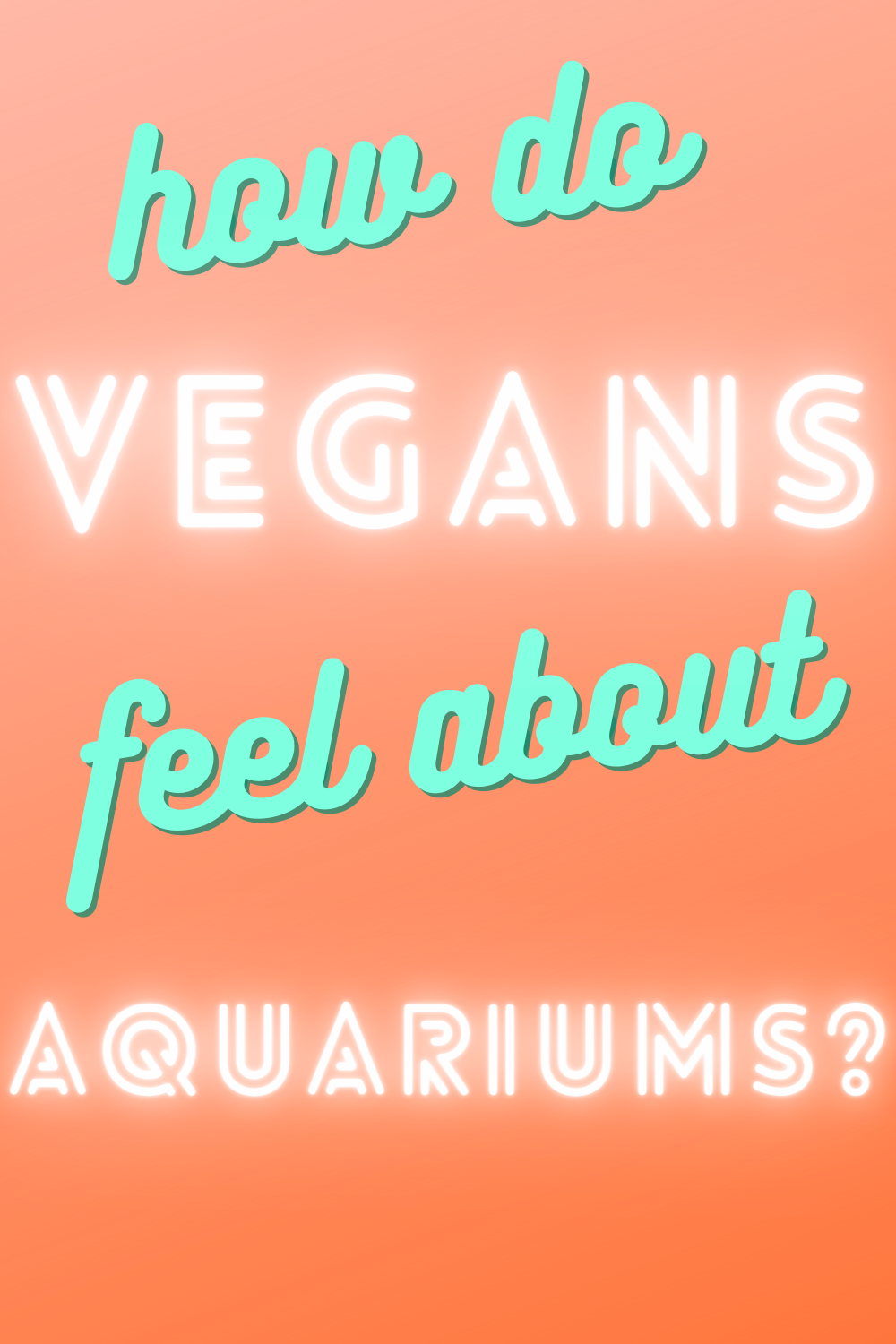 It will vary a lot from vegan to vegan about how they personally feel about aquariums.

I have mixed feelings. Whilst I abhor the practice of keeping cetaceans (whales and dolphins) in captivity, my boyfriend has kept tropical fish for many years.

And then there are those public aquariums that claim that the animals in their exhibit are unable to return to the wild. What other options are there?

I’d like to preface this article to say I’m terrified of big things in the sea with teeth. Terrified. But I very much want them to stay in the sea where they belong. I wish them well.

Why vegans don’t agree with keeping cetaceans in captivity

There are a few reasons why a lot of people (including non-vegans) are calling for a total ban on keeping dolphins and whales in captivity:

1 – They don’t get adequate space

I’m writing this sat in my office. It’s about 10 feet square. If I were forced to live my whole life in this pretty comfortable room, they’d probably make a documentary about me.

But that’s the reality for captive cetaceans.

They’re enormous animals, and even the fanciest aquariums simply don’t have the room to give them the space they need.

In the wild, killer whales can travel up to 100km per day. There are few, if any, aquariums that can provide these animals with a 100th of the space they need to live a full and happy life.

2 – It’s impossible to give them a natural life

Cetaceans typically live in large social groups and, believe it or not, don’t spend their days coming up with tricks to entertain humans. They’re travelling vast distances in search of food and breeding opportunities. We simply can’t replicate that.

The average lifespan of a wild orca is 50, but there are reports of them living well into their 80s. In contrast, an orca in captivity is lucky to reach 30 years of age. That’s a disgrace.

3 – They pose a danger to their keepers

Tilikum’s mental health issues have been wildly documented, along with many other captive orca. In simple terms, orca suffer in captivity and can lash out, with devastating consequences. Close the damn tanks.

4 – They frequently hurt themselves

Many captive cetaceans are covered in scars from their tanks. Not only are their tanks too small, but they often start to self sooth using repetitive movements that cause them injury.

As well as these injuries, the chlorine used to keep their tanks clean can cause skin and other health issues.

There are even reports of dolphins being beached on the concrete in their enclosures so that their tanks could be cleaned, resulting in injuries to their bellies.

5 – They’re often captured from the wild

Seaworld used to have a breeding programme, but it was far from successful, especially in the case of orcas. The animals wouldn’t breed, so they have had to use artificial insemination and there were rumours that the animals were drugged.

If you haven’t heard about the Taiji Dolphin Hunt, I urge you to read up on it.

Whilst the export of live dolphins from the hunt is now banned, every year there are reports that it still goes on behind closed doors.

There is no reason for keeping cetaceans in captivity.

I know that a lot of species are kept because they’re endangered, but chances are humans caused them to be endangered. We should either help to increase numbers in the wild or let the last remaining ones live out their lives in peace.

It’s a terrible thing when animals go extinct, but it’s even more terrible to keep a species going by keeping a few tortured specimens in captivity.

I’m not 100% anti-captivity, but I don’t believe there’s a way to keep large marine animals in tanks.

Surely it’s better to guard a portion of the sea? Or, you know, stop massive trawlers from scooping up every living thing in the sea.

I don’t believe we need to keep cetaceans in captivity to learn about them. Since they can’t display natural behaviour in tanks, we wouldn’t be learning much anyway. I was OBSESSED with dolphins as a kid, and never once saw one in real life.

If you want to learn about animals, watch a documentary on them.

But what about keeping fish in public aquariums?

This one is interesting, and I kind of feel the same way about zoos and aquariums.

Both make me feel a little bit uncomfortable. I don’t know how happy the animals in the exhibits are. But as long as they have a great environment they probably have an easier (and longer) life in an aquarium than they would in the sea.

I know more about fish than most people, and some of the things a lot of people don’t realise are:

That being said I don’t believe that fish that travel vast distances should be confined to tanks. Some aquariums claim that their large fish are unsuitable for the wild, but I don’t know if there’s really a way to vet this.

There will be vegans out there that abhor aquariums, and others that don’t have a problem with them. To be perfectly honest, I don’t know, so I choose not to go to them.

If all aquariums only took in fish that couldn’t be returned to the wild, then cool, but that’s unlikely to be the case.

I actually have a lot of thoughts on this subject, because i know a lot about fishkeeping. Like I said, my boyfriend has kept many fish over the years.

I wouldn’t keep a marine tank. Whilst it’s possible to find tank-bred fish that need a home, it’s impossible to wade through the ethics of finding live rock and sustainably sourced fish (i.e. not wild caught).

They’re also extremely expensive to run, and I don’t think they’re as pretty as tropical tanks.

I love goldfish, but they are treated terribly. They’re sold as a kind of ‘starter’ fish, when in reality they are extremely long-lived and can grow extremely big.

A lot of you will have heard the ‘a goldfish will only grow to the size of it’s tank’ argument and it’s broadly true, but also misleading. The goldfish may stop growing if it detects it’s tank is too small, but it will become stunted and sickly.

This is they type of aquarium I have the most experience in, and it can be a minefield trying to keep it ethic. Here are my tips:

Don’t go by what the pet store says. A lot of common fish sold in pet stores turn into tankbusters, and are unsuitable for small tanks.

Examples are: common pleco, clown loach, and syndontis. There are so many others. Do your research.

All cute, full of personality, and with the potential to get enormous.

Fish will eat other fish readily and happily. Some are notorious fin nippers. Some will be happy and chill for years and then turn around and eat their best mate.

Not to breed them yourself, but because it’s far more likely that they were bred in captivity. If you can’t find rescue fish, try to find a local breeder that cares for their fish.

That being said, not all wild caught fish are bad. Sadly enough, a lot of tropical fish from places like the Amazon end up in British fish shops because the rivers they in have been destroyed by industry.

Sometimes an entire species may live within a few square metres of river, and it’s wiped out overnight. Tragic but true.

This is where you need to do your research. There are millions of fish species, and to fish that look broadly the same can have totally different diets. Some plecs eat veggies, others eat meat.

Some are happy to eat flake food, some will eat it if you wiggle it over them using tweezers, others will sulk if they can’t have live food.

Predatory fish can be very picky, to the point where they’ll only eat live food. Feeding fish smaller fish is not only hideous practice, but it’s illegal.

If you want a large fish that will eat plants, there’s nothing wrong with getting a goldfish, They have great personalities.

This can vary depending on the fish you have. As well as the basic tank you’ll need a filter (as powerful as you can afford), heater, buckets, a net, dechlorinator, and food.

I also recommend getting some Melafix and Pimafix to deal mild illness.

Be careful with Bettas

About ten years ago, there was a craze for keeping male Siamese Fighting Fish (betta splendens) in tiny tanks – often literal water glasses or even funky shaped receptables.

Bettas only require a small tank, and like their name suggests, they will fight another male to the death so they need to be kept alone.

We researched getting our betta a female friend but he would have harassed her to death.

But they need a decent sized-tank, and it needs to have a filter. In fact, ALL fish tanks need a filter of some description. Here in the UK, our betta has a heater too, since he likes warmer temperatures.

It is possible to keep a betta in a community tank, but their flowing tail makes them a magnet for other fish, and they can end up with a nipped tail that is susceptible to infection.

I personally find bigger tanks easier to care for – the bigger the tank the more time you have to act if something goes wrong, like a bacterial bloom.

Why I’m not entirely comfortable with the fishkeeping hobby

Obviously not all people with aquariums are like this, but I know that it happens a lot.

I guess what I’m saying is that this vegan is torn about aquariums. I do NOT support keeping large marine animals in captivity, and I don’t really know enough about public aquariums that don’t keep large marine mammals to form an informed opinion, so I just stay away.

I’m perfectly happy for people to have home aquariums IF they do their research and provide their fish with everything they need.