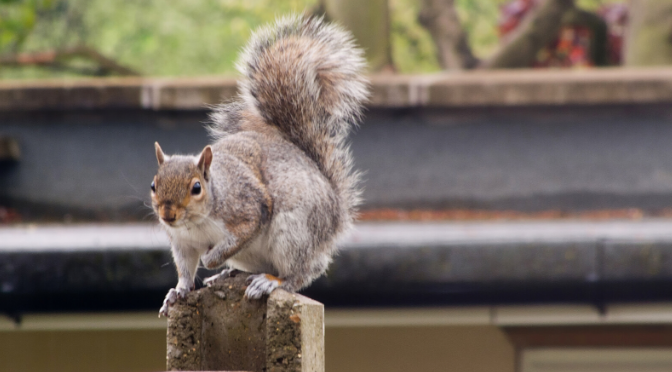 I get asked how I deal with pests fairly often, and to be honest, it depends entirely on the pest and the situation.

It’s important to remember that vegans aren’t perfect. We’re not defending mosquitoes when there are malaria outbreaks, and those worms that burrow into people’s eyeballs can fuck right off.

Would I kill a spider? No. Would I kill a spider that threatened my family? Yup. Just like I would NEVER EVER condone trophy hunting, but I understand when people fight off and kill wild animals that are attacking them. I’m lucky enough to live in a country with no predators likely to attack humans.

The closest we have are deer, which I assure you, are fucking terrifying.

They’re a prey animal, but a big, dangerous one – they’re predated on by wolves and bears, of which there are few in the UK. The deer seem to know this and have no fear of humans. If they feel threatened by you, they will attack – especially if you have a real predator with you, like a dog.*

*I mean, you’re hardly going to take a bear for a walk. I assume.

I seem to have segued into an essay on deer. Let’s get insects and rodents out of the way, and then I’ll give you a lesson on invasive wildlife. Oh yes, I have a vegan solution to the grey squirrel issue.

Well, someone else does.

I didn’t think of it.

I saw it on the telly.

I have a hell of a lot of house plants (100+) so I deal with a lot of flies and bugs. I use methods to deter them as much as I can, things like:

If I do end up with bugs on my plants, I use neem oil to get rid of them. It’s not the nicest thing to use (it messes with their hormones so they can’t reproduce) but it’s better than chemical-laden insecticides.

It doesn’t harm spiders, but it does affect pollinators, so don’t use it outside. If you need to, use it in the evening when there are fewer about.

Speaking of spiders, keep them around. They eat a lot of bugs. I noticed webbing on my Calathea Orbifolia and instantly panicked, thinking I had spider mites. Nope, a little spider had set up camp, presumably because there were fungus gnats about. Perfect.

My boyfriend is the wasp remover – he’s a fan of the ‘waiting till it’s by a window, catching it in a glass and releasing it’ method. I just vacate the room and never return (until Dave comes home and gets’ it).

Try not to kill wasps. Obviously, if you’re in danger, whip them with a teatowel. Don’t use insecticide – it’s cruel, but also it takes them a while to die and they go MENTAL whilst they’re dying. But if you can, just either catch and release, or leave a window open and wait.

I moved into an old house a couple of years ago, so I randomly spray my cupboards and floors with a solution of peppermint oil and water. I don’t think this’ll be that effective if you already have mice, but it may may them reconsider moving in.

As far as dealing with rodents, I’d go for humane traps. Catch the mice and then release them far away – they’re not going to remember your address and come marching back (Fun fact: ducks have amazing homing instincts, so if your issue is ducks, consult a professional duck wrangler).

Those plug-in things that emit a frequency that bugs mice aren’t 100% effective, and you can’t use them if you have any other pets.

Don’t go for those hideous snap traps – the chances of the mouse being killed straight away are minimal. They usually just get their front paws caught, and I’d hate for anyone to have to beat a mouse to death to put it out of its misery.

Deer (and other wildlife)

Ooo, and we’re back to deer. Yup, wildlife can be pests too. The main two that crop up are deer and grey squirrels. I think grey squirrels are a case of having to live with the consequences of our actions.

I always used to think the issue with grey squirrels was that they spread disease to our native red squirrels, but that’s a tiny part of a much bigger issue. You see, grey squirrels are far hardier and better suited to our environment than red squirrels.

(PSA: the red squirrels in the UK aren’t even native – ours all died out and the ones we have now are from Scandinavia)

Red squirrels primarily live on acorns. The main reason their numbers dwindled is habitat loss. If you didn’t know, the UK’s natural landscape was naturally oak woodland – even a lot of upland areas. The forests were destroyed to make way for towns, moorland, and grazing, and the majority of the red squirrel’s habitat was lost.

Grey squirrels didn’t help red squirrels, but they didn’t cause the decline. Grey squirrels are hardier – they’ll eat anything, and are more adaptable- they’re happy to forage from bins and live in cities. Survival of the fittest, as they say.

I don’t agree with culling grey squirrels. It’s cruel and, crucially, it doesn’t work. Experts have observed that after a cull, grey squirrel numbers boom – their reproductive patterns respond to a mass culling.

So what do we do?

By protecting the habitat of our native pine martens, we can reduce grey squirrel populations. Red squirrels fear pine martens and flee at their scent. Greys don’t because pine martens don’t live in North America. Do pine martens care what colour squirrel they eat? No.

I know this doesn’t seem very vegan, and I don’t exactly relish the thought of squirrels being eaten, but this is nature. Pine martens are endangered, grey squirrels are prolific. Helping the pine marten reestablish their numbers is the best way to protect our wildlife.

The only way to control the deer population in the UK is to cull it. I don’t think introducing wolves and bears is a good idea. We’re a small island, with not that much open space. It’s asking for trouble.

I don’t see why we can’t sterilise the deer. The idea of giving animals contraceptives was talked about when they were considering what to do about grey squirrels.

I don’t have the answers when it comes to deer. I have no idea how one would go about putting a deer on the pill.

2 thoughts on “How do vegans deal with pests?”