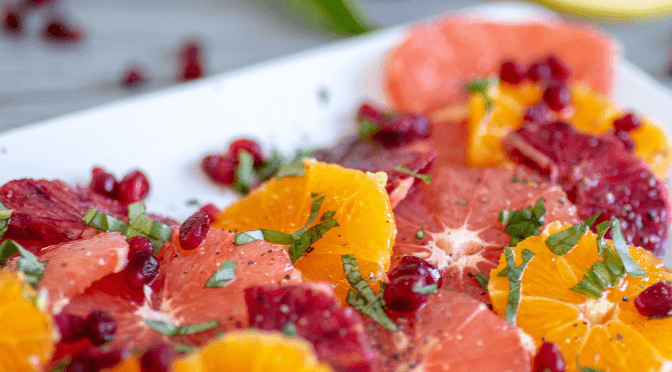 Do vegans suffer from low energy?

Is it because they’re vegan?

No. It could be because of what they’re eating, but not because they’re vegan (unless they have some sort of medical condition).

It’s a common misconception that we vegans are a weak bunch, stemming, I assume, from the misguided notion that we don’t have many options, food wise.

Is simply not true

That being said, I transitioned to a vegan diet over a very long period of time. If you go cold turkey (which I think is an incredible achievement), you may struggle with low energy at first. I mean, you might not, but also you might.

Does being vegan give you more energy?

One quite often reads case studies (usually in Fitsugar or similar) about people that go vegan and instantly drop three stone and have enough energy to salsa up Mount Everest twice a week.

I didn’t get that. When I initially went vegan I felt a bit low-blood sugary on occasion, but probably because I wasn’t really eating healthily. I strongly believed that I could get a lot of my calories from bread. Not a great idea.

After a few weeks though, my body adjusted, and now I have, you know, normal energy.

How to boost your energy

Ok, before we even START, I’m going to assume that I don’t need to tell you to drink plenty of water. We all know that.

I know. That isn’t what you wanted to hear. BUT THEY WORK.

Seriously, after I’ve had a green smoothie I feel like I could go into battle.

I’m currently using a spirulina greens powder, but just whacking a load of spinach in your smoothie will work. I find that rocket is great for increasing energy BUT it will make your smoothie taste very rocket-y, so be warned.

Juices are energising but not filling, so I prefer a humble smoothie.

I like to run in the morning but if I eat anything at all prior to exercise it makes me really nauseous. I have two cups of coffee whilst scrolling through my Bloglovin’ feed and that gives me enough of a boost to run, and then I have a smoothie when I get back.

I sound like a real knobhead, but I promise I’m not. My morning run is really just a walk where sometimes I scurry.

All day everyday. Bananas are good, especially with some nuts. Nuts on their own are not enough for me, because my brain refuses to believe that such a tiny amount of something could possibly fill me. Ignore the haters that say that fruit is full of sugar. We don’t need that kind of negativity.

If you’re feeling a bit wobbly, then a quick sandwich is a great fix, BUT I find that carb-heavy foods don’t tend to fill me for too long. A smoothie may be a bit more of a faff to make, but if you chuck in some fruit, chia seeds and nut butter, it’ll keep you full for a decent amount of time.

There’s nothing wrong with a little nap if you’ve had a hard day. A cup of coffee, then a twenty minute nap is a great little reviver. Just make sure you can fall asleep before the caffeine kicks in.

Just a little walk about. I personally don’t find exercise to be very energising UNLESS I do yoga before bed, I which case I cannot sleep. Unless it’s a special sleepy time practice. Anyway. Just get up from your chair/sofa/bed and shuffle about a bit. Make yourself a drink. It’ll help.

Dietary issues that can cause low energy levels

If you think that you have abnormally low energy levels, go to the doctor. Get your bloods done,  there could be a medical reason for your slump.

Your iron levels could be low, which makes you feel tired.

Don’t go out and buy an iron supplement – too much iron is as bad for you as not enough. Download something like myFitnessPal to track your levels, and educate yourself on the foods that contain iron, and those that help it’s absorption. I like this blog post for great info on iron.

Pernicious anaemia (or B12 deficiency)

Get yourself a B12 supplement. I take mine once a week, or whenever I remember. Our bodies can store B12 so don’t fret about getting some every day.

Undiagnosed, food intolerances can cause big issues, such as leaky gut syndrome. Get a blood test if you’re suspicious, and pray to every god there is that you’re not wheat intolerant (no more good bread) or soya intolerant (they put soya in fucking everything).

A lack of energy can be a manifestation of depression, often in busy people who don’t have time to be mentally drained, so it transfers to their physical body.

Depression is a weird thing – I didn’t realise I suffered from mild depression until I had a fortnight-long depressive episode.

Because I wasn’t desperately sad or suicidal I just assumed it was the new way that I felt (like nothing really mattered), until one day the depression lifted. Thankfully that’s the most depressed I’ve ever been, but it really helped me to be able to distinguish between the way I actually felt, and the way depression was trying to manipulate my feelings.

To answer the question…

There are a lot of factors that can influence our energy levels. Diet is a very important one that shouldn’t be overlooked, but as long as you are consuming plenty of calories from varying sources then your diet shouldn’t cause you to be low in energy.

If you are, consult a doctor.

But before doing that, make sure you’re getting enough sleep, vitamins, water, and are loaded up on caffeine.

Don’t think that going plant-based will automatically give you a shit tonne of energy though. It doesn’t. Not for me anyway. If you need something to get you in the mood to ride into battle on a flaming steed, try a green smoothie. Add spirulina. You won’t regret it. 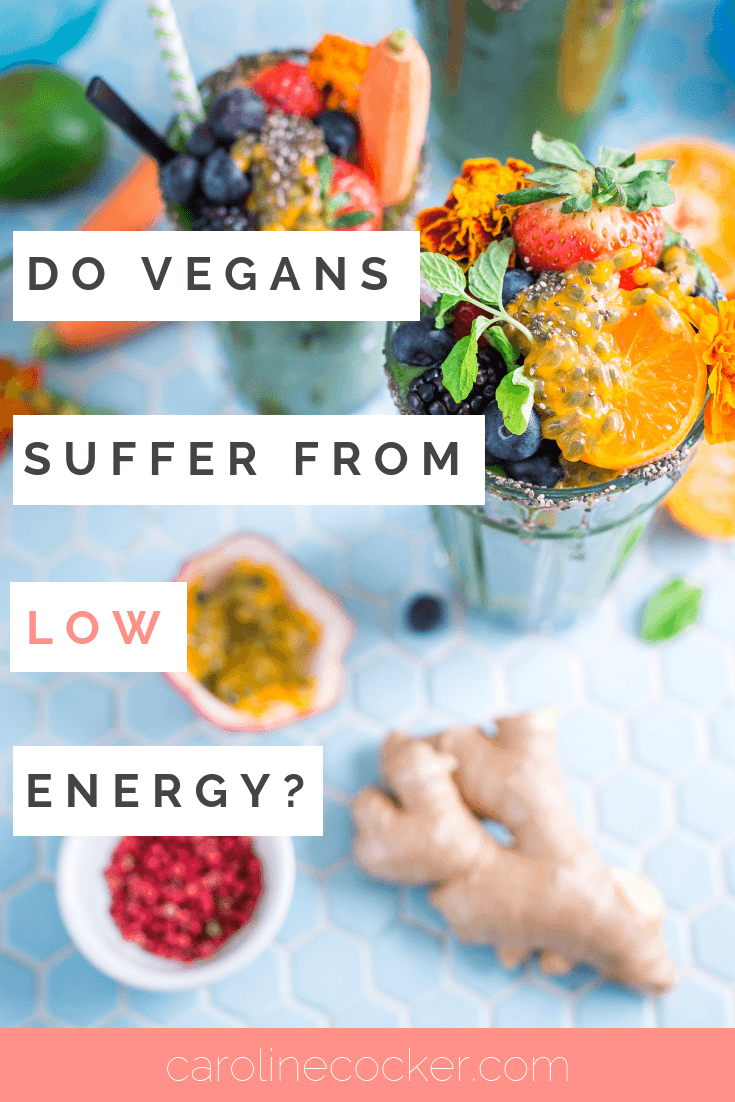 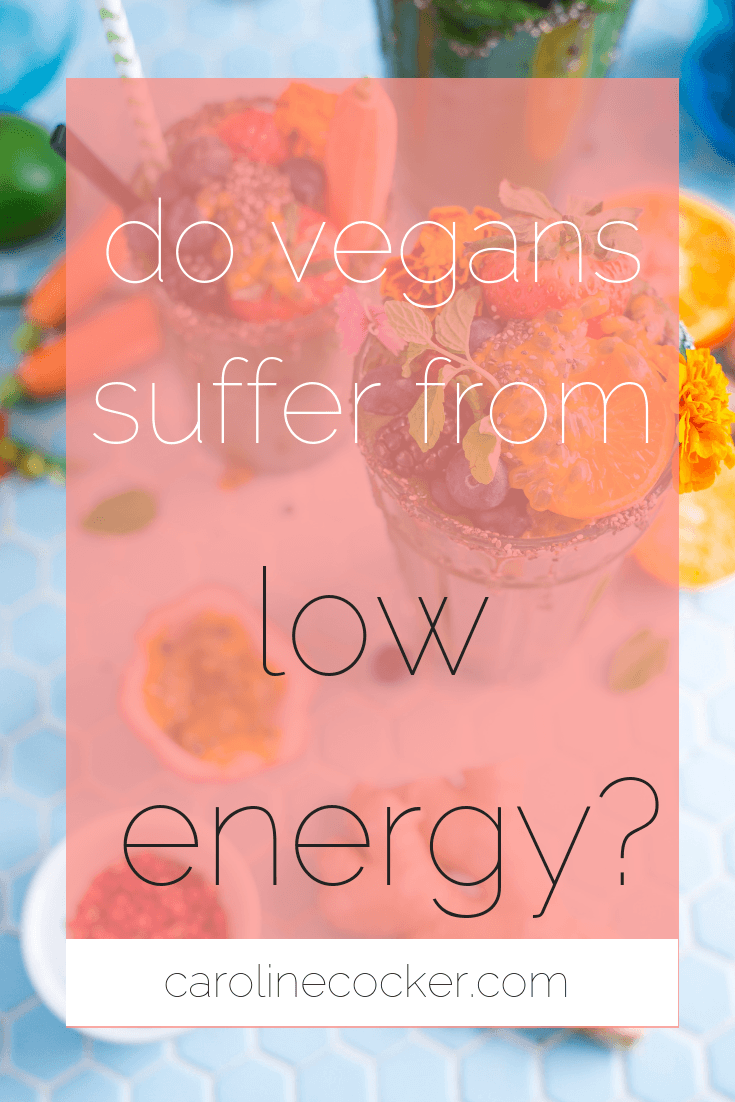