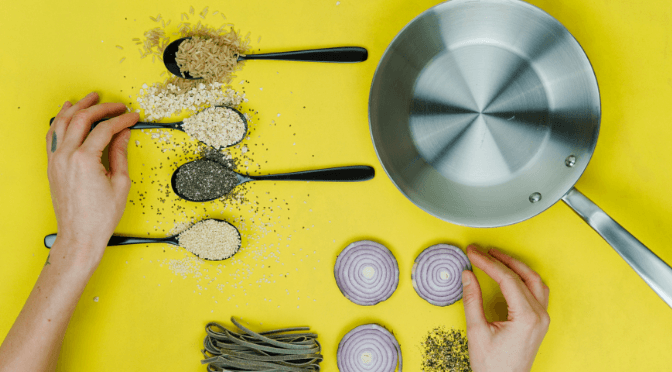 I do like cooking, so I feel comfortably qualified to offer up easy cooking tips that do actually work, but please don’t think that I’m some kind of kitchen whiz.

I have made a couple of different kinds of cheese sauce, I’ve made aquafaba meringues (I think I used this recipe), and I’ve done a whole post on my experience making vegan Yorkshire puddings.

It’s a lot of hassle.

There’s also all of the compiling of the ingredients and the washing up, which makes it all the more painful  if your recipe doesn’t work.

So occasional fancy cooking is all I manage.

Easy cooking is where I shine. I’m all about getting my five a day in one meal, whilst also only using one pan.

Some of the easy cooking tips I’m going to share are general lifestyle/cooking/living tips, others are specific meal hacks.

Affiliate links will be marked with an asterisk like so*. My full disclaimer is in the footer. I will only link to products I own myself and use regularly unless I’ve expressly said otherwise. If I offer an alternative product (say, the product I have is no longer available) it will be based on the most similar product that is well-reviewed and at a similar price point.

I know this stuff is boring but let’s keep things legal and transparent.

Ok, on we shall crack:

The absolute bare minimum is to peel your bananas, chop them into three, stick them in a box (old margarine tub preferably) and freeze them.

Your smoothie game will be upped significantly, I promise.

You’re also all ready to go for some nice cream, which I’m yet to make successfully, but you might have better luck.

This one is life changing. I think it’s only life changing to me and a select few of you that fucking love fresh tomatoes and until now didn’t know that cutting them with a serrated knife makes it a thousand times easier.

Also, bruschetta fans, if you live near a Coop I can highly recommend the garlic and herb ciabatta sticks they have – they’re in the fresh pasta section. Delicious.

Also, Coop fans, if you don’t have a Coop card GET ONE. You get 5% of your spend on Coop branded stuff back on your card to spend in store, and 1% goes to a local charity. I made £50 last year, which I saved up to spend on snacks and wine at Christmas. This isn’t sponsored, I’m just a huge Coop fan.

Also, the jam doughnuts are vegan.

I feel like fake herbs get a bad rap, because fresh herbs make us feel so fancy.

I do LOVE fresh herbs – parsley and coriander mixed with tomatoes and then stacked on hummusy toast is the best hangover cure there is.

However, aspirin has side effects which plants that contain salcylic acid don’t seem to, probably because additional nutrients that protect the gut. Herbs and spices have the highest levels of salicylic acid.

If you’re interested in the protective properties of plants, and how the incredible effect your diet has on your health, I urge you to read this book*. I’ve recommended it to everyone I’ve met ever.

No clue about cooking?

I put mixed herbs, chilli powder, cumin, and paprika (usually smoked, but it’s up to you) in chillis.

Curry powder, ground coriander, ground cumin, paprika, and turmeric in curries. Or just get garam masala, which is a spic blend.

I put cinnamon in both curries and chillis, but be aware that it tastes really…cinnamony. I put a teaspoon of each herb or spice into each dish, but only half a teaspoon of cinnamon.

If you don’t own any spices and have no money (well, £2) get smoked paprika and garam masala. Got another pound? Get some dried mixed herbs.

Oh, and those real plants you can buy from supermarkets? They die for a reason. Here’s a blog post I found on how to keep them alive for as long as possible.

I love risotto, but it’s a bit intensive on the old stirring.

If you like a dish that’s risotto adjacent (i.e. delicious, ricey, vegetablely, and only uses one pan) then make yourself a delicious sauce using onions, a tin of tomatoes, herbs, and various other veggies like mushrooms, peppers, aubergine, whatever else is lurking in the fridge and then…

…Stir in a pack of microwavable rice. I use brown rice because it’s healthier and tastes better.

The only issue is the plastic-packaged rice, but I eat rice so infrequently that I feel that it doesn’t really matter.

5 – Put beans in anything

Beans are incredible superfoods, by which I mean they’re cheap, convenient, and powerhouses when it comes to nutritional benefits.

Put a can of kidney beans in a stirfry.

Add black beans to a smoothie. This recipe is delicious. Chickpeas also go well in smoothies. I usually put in a third of a tin – put the rest of the tin in the fridge (decant into tupperware) and either use it in something else or have smoothies consecutively for three days.

I have been known to put beans in my fake risotto. It’s really not risotto, is it?

6 – Throw money at the problem

Are you too lazy to chop up vegetables?

Onions are the worst. Not only are they awkward to cut (slippery and spherical. Give me strength), but they literally make us cry.

I can’t be arsed to wash up my food processor so I chop by hand, but all of you dishwasher owning friends out there may prefer to invest in a mini-chopper.

I asked my mum for an immersion blender for Christmas one year, and she got me one like this*. I’ve actually linked a different one to one I have because the reviews for mine (or a newer one by the same brand) aren’t great. Apparently, a lot of people have issues cleaning it. Anyway, the one I linked has great reviews.

If you need to cook large quantities you’ll need a food processor, but for small batches of things it’s great. I use it for pesto and protein balls as well as chopping onions. It does chop them super finely, so a food processor would be better for slicing them.

I need my food processor to make smoothies super smooth and make cashew sauces that aren’t gritty. I thought I’d need to save up for a Vitamix but then I got  Nutri Ninja*.

I have been known to chop stuff in the smoothie cups, which works like a charm (though you’re not meant to put hot liquids in it).

I haven’t tried it, but I think it’ be wicked for whipping aquafaba – just stick it in the smoothie cup and watch it go.

7 – Fill the sink before you start

Washing up is the worst part of cooking, and especially baking.

Fill the washing up bowl (yes, I’m aware that this is only a thing in the UK, but how do you use the sink if it’s full of water? You can lift the washing up bowl out) before you begin and washup as you go along. Not only does it save time at the end but it reduces the risk if you staining the chopping board or something (yorkshire pudding batter) from setting like concrete on your crockery.

8 – Cook the onions first (but be careful with garlic)

If you’re making pasta sauce, curry, chili, risotto or anything similar, the general order in which you cook things is largely the same.

Once you’re comfortable with this, then you can be more experimental (and by this I mean you can work out how to adapt a recipe to fit with the crap you have left in the fridge).

A note about garlic

I tend to put garlic powder in around the time I add the tinned tomatoes. I rarely use fresh garlic because it makes my fingers smell for hours.

A lot of recipes recommend adding the garlic after the onions, around meat time, but it burns like a bitch. If you need fresh garlic, I’d cook it before the onions in warm oil. Stir it and remove it from the pan when it starts to smell incredible. Add it back in around tomato time

TAKE YOUR OWN ADVICE HERE, CAROLINE.

Double check that you have all the ingredients. Please.

Then read through the WHOLE RECIPE.

There’s nothing worse than deciding on a recipe, buying the ingredients, and making a start, only to discover that you either don’t have one of the tools required (it’s usually some kind of baking tin for me) or that you have guests arriving in 45 minutes and the dinner you’re cooking them needs to be chilled overnight.

Ok, I know this is a post on easy cooking tips, and this is just…common sense, but it’s so important. Surely I CAN’T be the only person out there that’s been caught out by a rogue sentence like ‘leave the sauce to cool to room temperature’ before.

Ever since Nigella Lawson told me to do this (through the tv, we’re not mates or anything), I’ve never boiled it again.

You can either cover it in pasta sauce as usual or use it as a chip replacement, as an accompaniment to salad and Quorn fish fingers.

Not that it matters. All that I care about is that you found a post on easy cooking tips for vegans and I delivered that.

It’s currently 6 weeks away from my friend’s wedding and I don’t fit into my dress, so I’m currently eating cutting down a lot on oven chips and eating a lot of vegetable stirfry with baked tofu, hoisin sauce and quinoa.

I’m also intermittent fasting three days a week, which means I’m having a smoothie and toast (with hummus and the Quorn vegan ham) for breakfast, then a big lunch of pasta or bean soup and then…nothing. I think it’s working.

Btw we went to Lost and Found in Leeds for the hen party dinner and the vegan options were lush. Can also recommend Make No Bones in Sheffield – the burgers are incredible, and EVERYTHING is vegan. 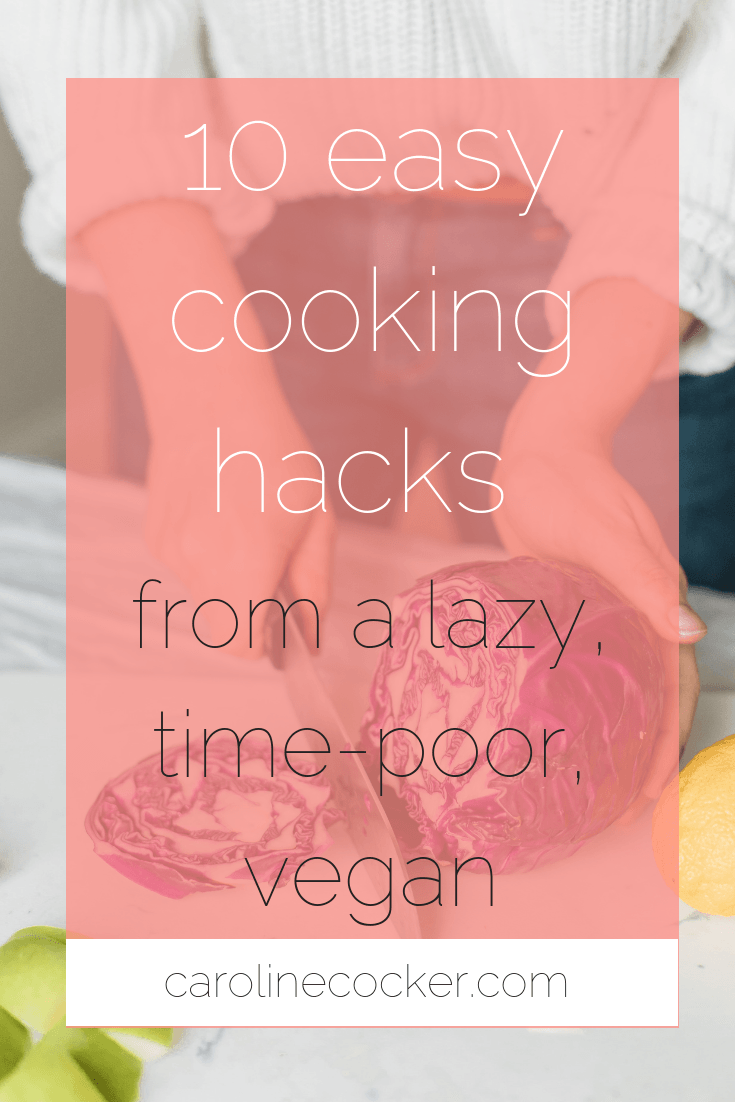 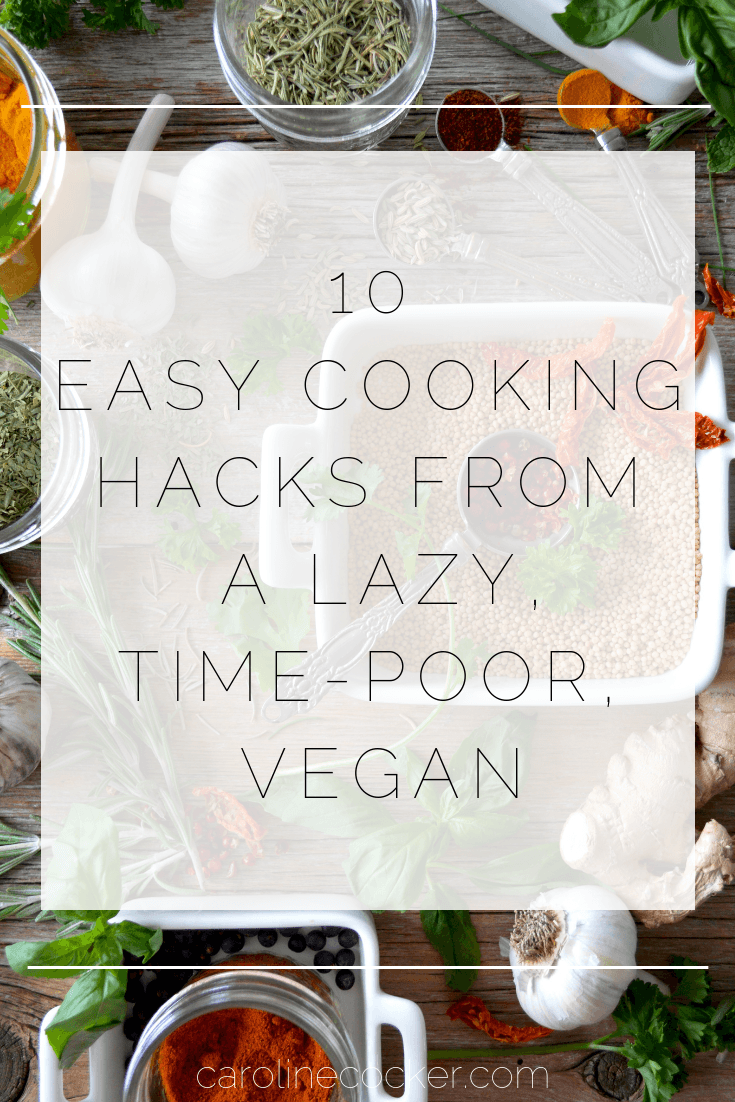 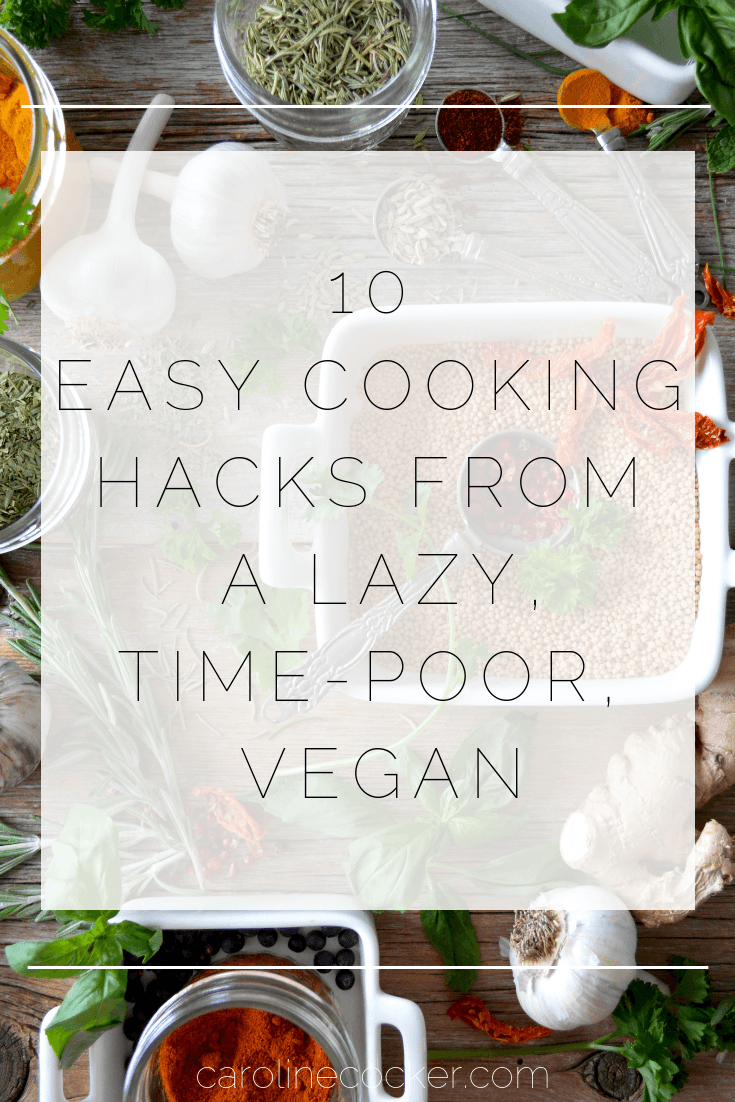 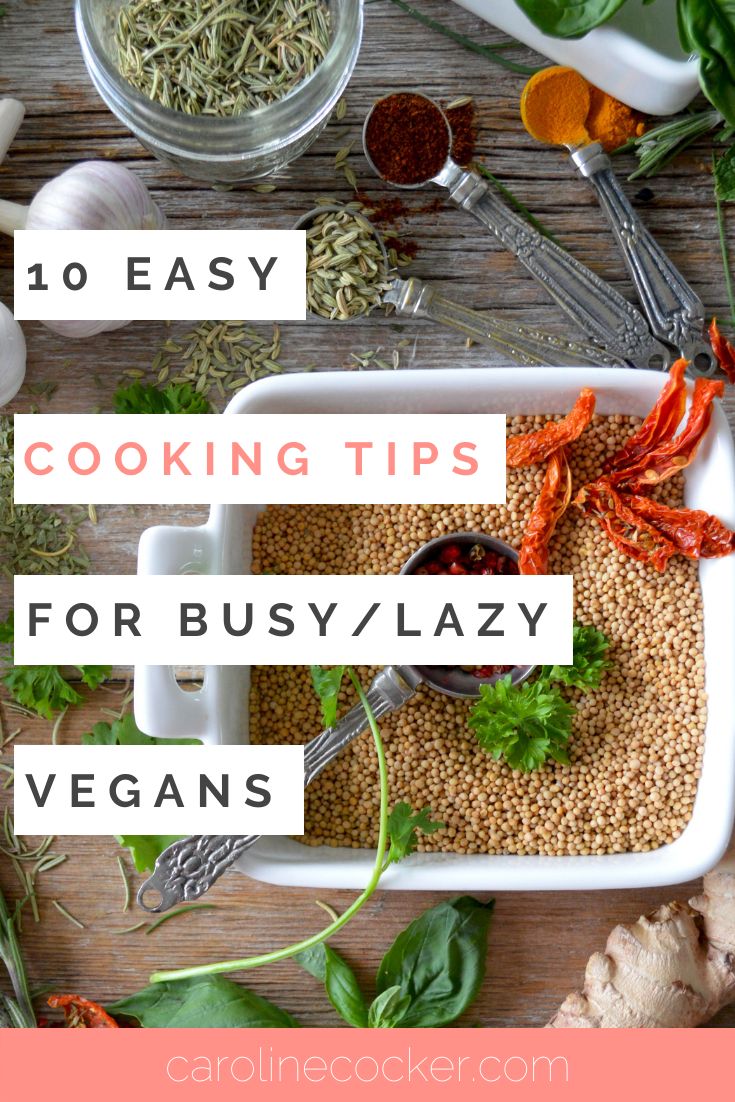 4 thoughts on “10 EASY COOKING TIPS FROM A LAZY, TIME-POOR VEGAN”